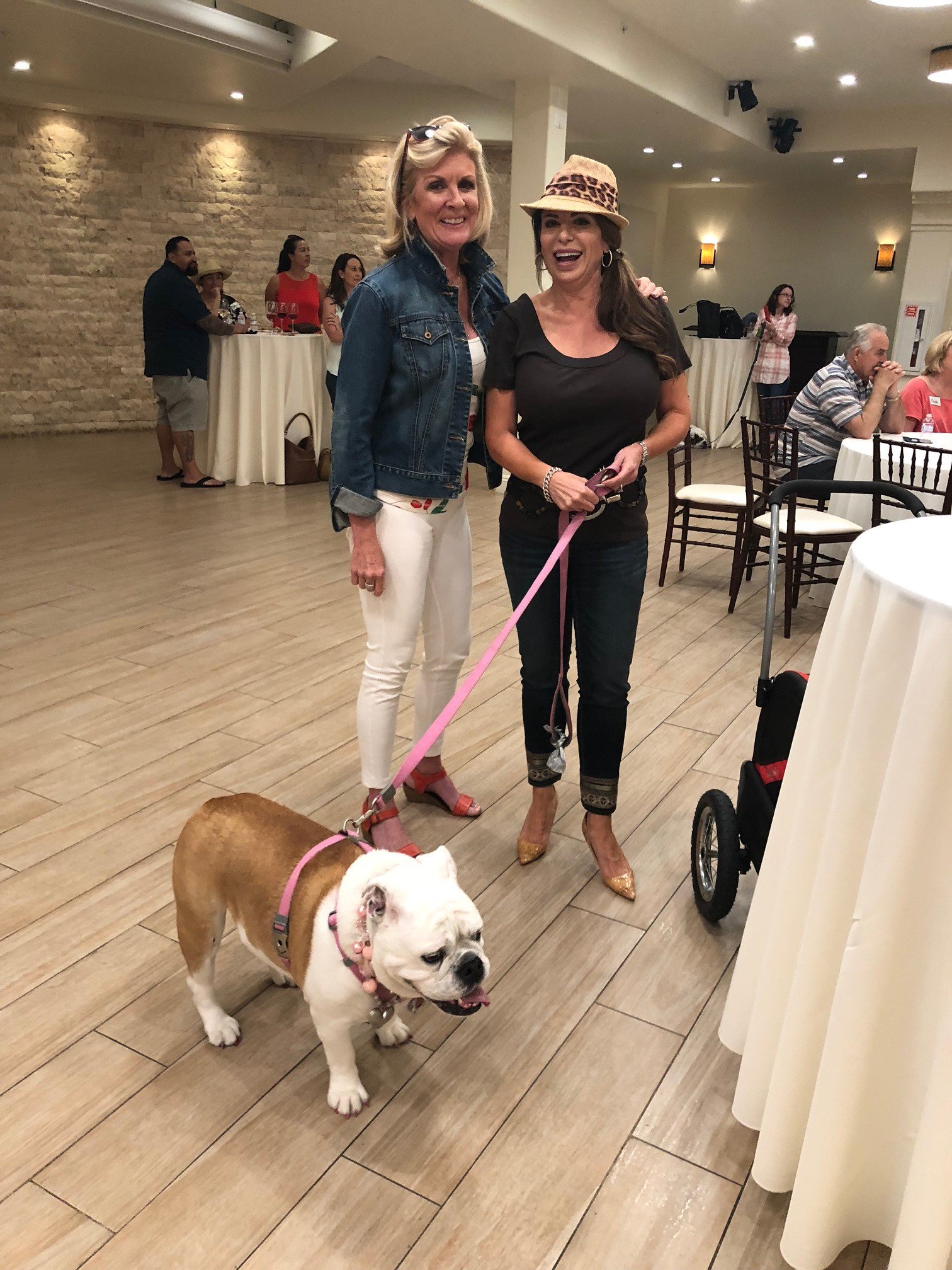 In the heart of historic San Juan Capistrano, bulldogs, their owners and dog lovers joined together to support the Southern California Bulldog Rescue on June 2 at Sundried Tomato. For its sixth consecutive year, “Bullies Uncorked” was hosted by Rancho Santa Fe resident and philanthropist Holli Lienau.

An avid animal lover, Lienau also has a soft spot for English bulldogs. She already had three dogs of this breed. Her 3-year-old bulldog, Miss Matty, was a rescue from Southern California Bulldog Rescue. Lienau said the nonprofit partners with another organization named poundWISHES, which assists shelters and rescues with helping find dogs their forever homes.

“Miss Matty was dumped at a shelter in Riverside County. She had a severe case of demodectic mange at 3 months old — it was medically treatable,” Lienau said. “After Miss Matty was nursed back to health with medication and special baths, SCBDR uploaded her information on poundWISHES, and I fell in love with her just like that.”

Lienau describes bulldogs as unique. Yes, they can be strong-headed and pushy, but they are also sweet and very affectionate, she said.

The co-founder and director of the organization, Skip Van Der Marliere, was on hand enjoying the day. Established in 1997, Southern California Bulldog Rescue saves between 400 to 450 bulldogs per year.

“This includes owner surrenders, shelter rescues and surrender from vet offices,” he said. “There are also other dogs we count as rescue assisted — dogs we help keep in homes with donations of medical care, bags of food and reunite with original owners.”

While Southern California Bulldog Rescue is in Orange County, Van Der Marliere said it branches out to San Diego, to the borders of Arizona and Nevada, and stretches up toward Visalia and Fresno.

Van Der Marliere said “Bullies Uncorked,” is a popular wine event with appetizers and fabulous food. The organization relies on fundraisers since it does not have a steady revenue of income.

“Bullies Uncorked is one of our star events,” he said.

“They’re a companion breed, so I think they fill a lot of what I need in a dog. There’s a right dog for a family, and I needed a breed that was going to be a companion for me, surround me and enjoy the attention I want to give,” he said, noting how he had five bulldogs. “I enjoy that in the breed, and this is what the breed gives — it fits my lifestyle, and they fit into my family, and that’s what I value most.”

In addition to wine tasting, sangria, hors d’oeuvres and adopted bulldogs with their pet parents, silent auction and live auction items were sought after. Three live auction experiences were gifted from Lienau, founder of the organization, “Holli” day … Any day! Lienau is hosting all three events.

“This is a private wine tasting which will feature premium wines from Baja’s premier wine growing region, Valle de Guadalupe. Local Baja ambassador, Fernando Gaxiola, will lead us through a selection of fabulous wines and Bueno Bueno will provide their deliciously paired appetizers,” Lienau said.

The other two live auctions, which went for more than $2,000 apiece, take place at Lienau’s vineyard in Rancho Santa Fe. Guests will be picking Sangiovese, Cabernet Franc and Petit Syrah grapes.

“From the two auctions, four lucky people will join us at our Annual Grape Harvest and Harvest Pizza Party. They will spend a morning with us harvesting the grapes in our vineyard,” said Lienau, adding how the highest bidders will also have an overnight stay at The Inn at Rancho Santa Fe. “Then these lucky people will relax during a pizza party at our beautiful outdoor kitchen complete with a pizza oven.”

Lienau said everyone loves to come to her vineyard and pick grapes. In fact, they ask her to come, she said.

“I’m like, OK, ‘You can pay to come and sweat in my yard and harvest grapes,’” Lienau quipped, adding how most times it’s a warm morning, but great fun and an afternoon of wine and pizza as a reward.

While the auction winners are having a good time this harvesting season in September, Lienau will remind them of the fact that their generosity helped bulldogs in need.

To learn more about SCBR or fostering opportunities, visit http://www.socalbulldogrescue.org/